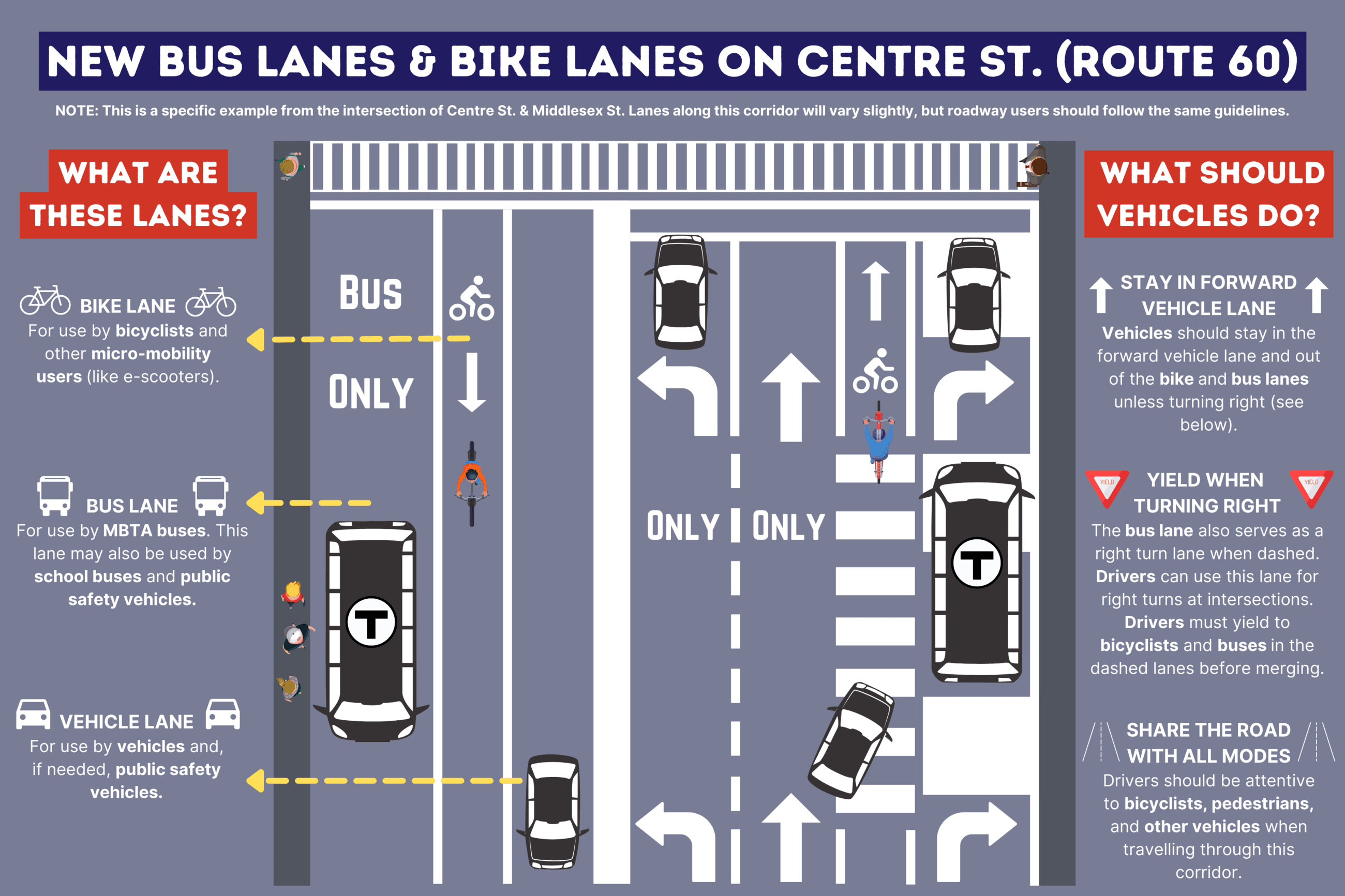 What is the current status of this project?

Last Updated 1/20/22 - White thermoplastic roadway markings have been installed to finalize the pilot lane changes on Centre St. (Rt. 60), Main St., and Eastern Ave. (Rt. 60). Final signage indicating bus lanes, bike lanes, and other markings will be implemented in the near future once weather conditions improve. The remaining striping (red for the bus lanes, green for the bike lanes) will be implemented in Spring of 2022. Once all components of the project are finalized, a feedback form will be made available for residents to share comments regarding the project. 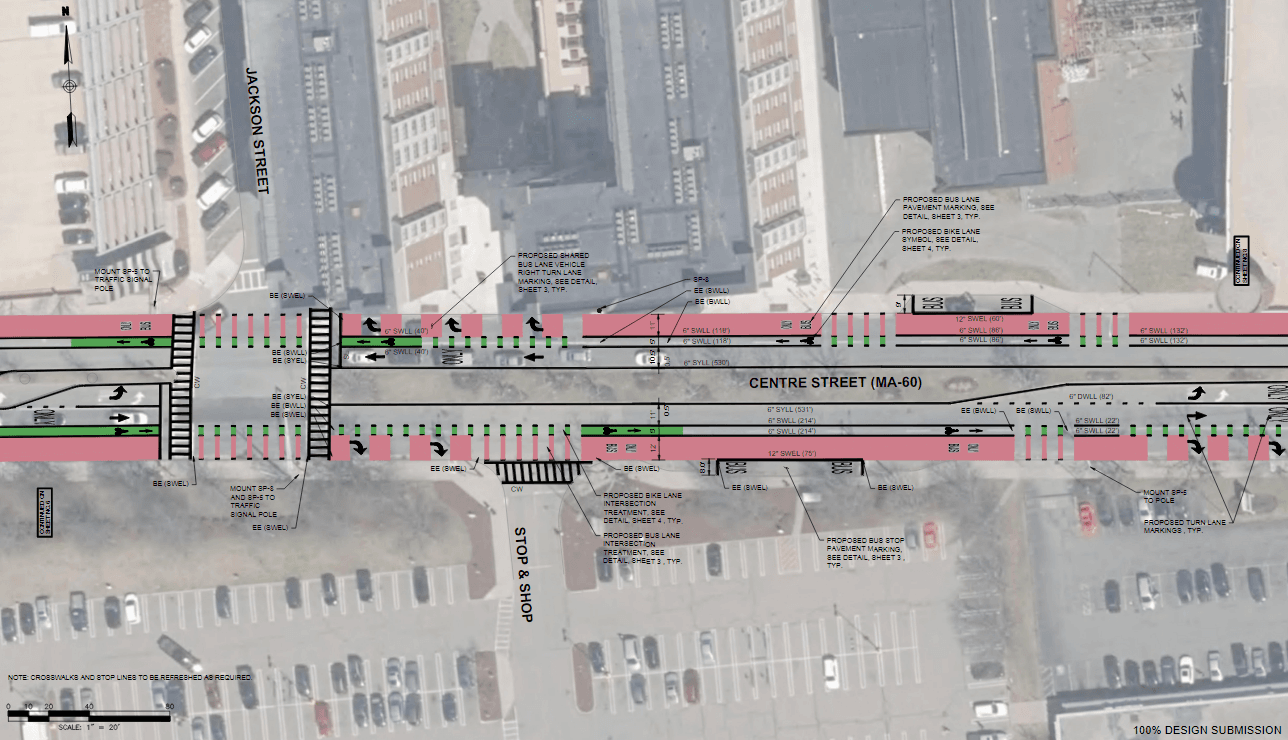 What is this project?

This is a 100% grant-funded project by MassDOT and MBTA that will:

Centre St. is converting one vehicle lane on both sides of the roadway into a dedicated bus and a dedicated bike lane. This will result in a single through lane for vehicles and enhanced turning lanes at all intersections along the corridor. Main St. is receiving new striping from Centre St. to Pleasant St. The southbound lane will have enhanced vehicle turn and through lanes along with a new bike lane. The northbound lane will have a new dedicated, shared bus/bike lane.

These changes to Centre St. and Main St. are intended to allow buses to move efficiently to their destinations and provide bicyclists a dedicated lane on which to ride. It is also aimed at preventing bottleneck issues when vehicles merge along the eastern/western ends of the corridor by creating one lane throughout the corridor and eliminating the merges. Traffic backups caused by busses stopping in traffic to pick-up and drop-off riders will also be eliminated, because buses will be in a separate lane. 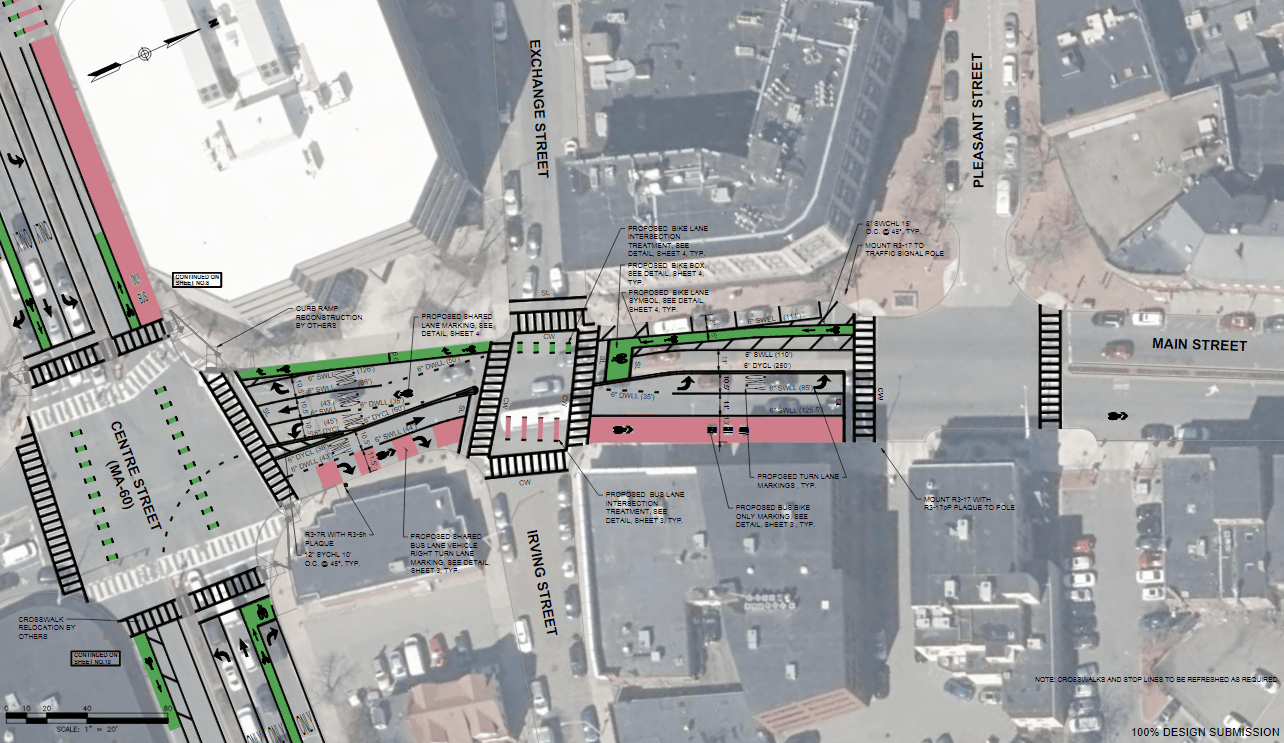 Eastern Ave. (Rt. 60) is being re-striped to maintain one vehicle lane from Centre St. to Franklin St.

These changes are aimed at preventing unsafe speeding along the corridor by better defining and narrowing the current wide, open vehicle lanes. It will also prevent bottleneck issues when Eastern Ave. merges into one vehicle lane on the eastbound side. No vehicle turn lanes will be removed. 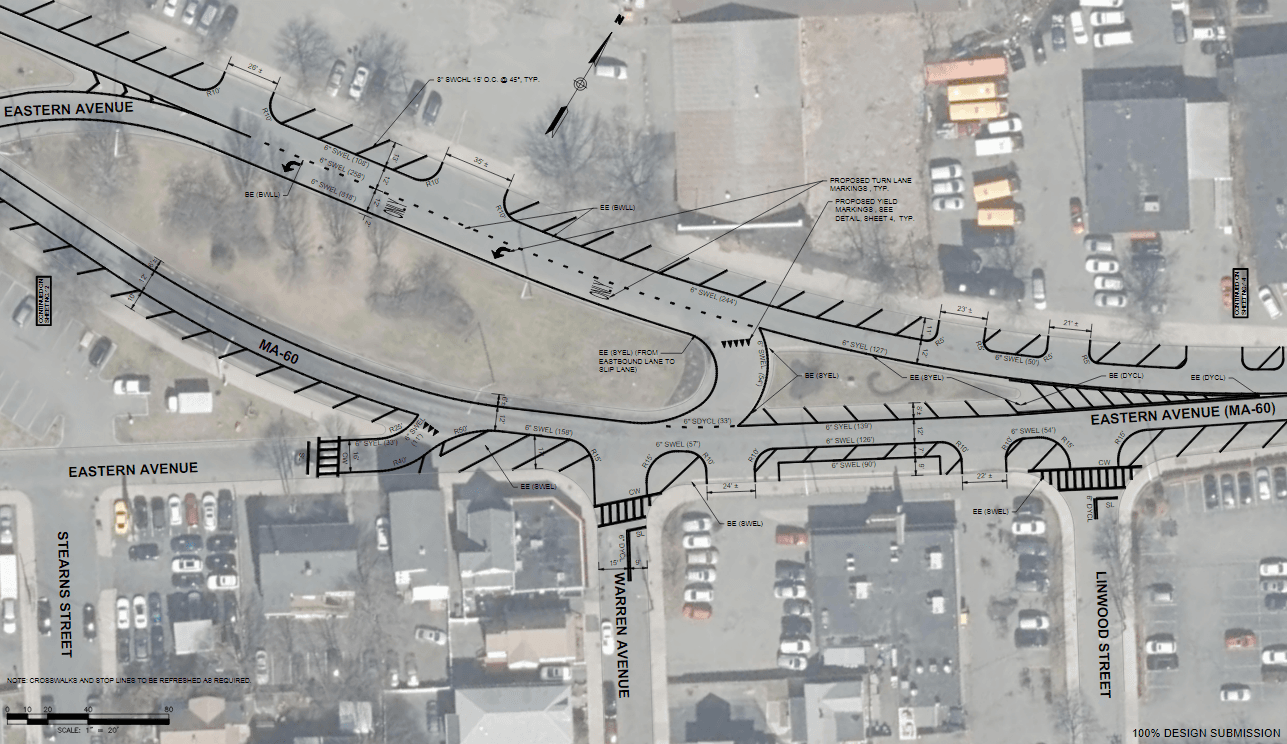 Restriping of two vehicle lanes on Eastern Ave. into one.

Traffic signal equipment on Centre St. and Main St. is being updated to include transit signal priority (TSP). TSP is a new technology that gives buses and equipped public safety vehicles priority when approaching intersections. For example, traffic signal equipment with TSP can detect an approaching bus and keep the light green for a bus to pass through. Lights can turn red if equipped public safety vehicles need to make their way through an intersection. In Spring 2022, TSP will be installed along the entirety of Centre St., and later in 2022 from Oakes St. in Everett north onto Eastern Ave. in Malden as part of a separate grant program.

The intention of updated traffic signals and TSP is to improve the efficiency of buses travelling along key corridors, alleviate congestion issues for vehicles, and decrease the response time of public safety vehicles. You can learn more about Transit Signal Priority on the MBTA's Bus Transit Priority Page.

Why is the City partnering with MassDOT and the MBTA to implement this project?

The City is partnering MassDOT and the MBTA to implement this project because it would like to:

What is the timeline for completing this project?

The lane changes and re-striping on Centre St., Main St., and Eastern Ave. should be completed by early Winter 2022, with red and green paint installation in Spring 2022. Once finished, new traffic signal equipment will be installed with TSP capabilities. The Centre St. and Eastern Ave. (Rt. 60) project should be completed by late Spring 2022, with the Main St. signal project completed later in 2022.

How was this project developed?

Residents identified this project as a priority during the public engagement process for Malden’s Complete Streets Prioritization Plan development. In 2021, the City and MBTA jointly applied for a MassDOT Shared Streets & Spaces Grant and a Boston MPO Community Connections Grant to fund various components of the project. The City and MBTA were awarded a total of $716,000 to make these improvements.

The City Council hosted a public hearing on April 13, 2021 and voted 9-2 to support the project. Previously, this project was also discussed at the following meetings:

A traffic volume analysis conducted by the MBTA showed that a single vehicle lane on Centre St. can accommodate 1200 vehicles per hour without causing traffic delays along the corridor. The westbound morning rush hour average vehicle count was 898 per hour, and the eastbound evening rush hour vehicle count was 908 per hour. Both average traffic counts (based on pre-pandemic levels) are below 1200, indicating that a single lane should not exceed the lane’s capacity and cause significant delays.

Who is paying for this project?

This project is entirely funded by grants and supplemented by MBTA capital funding. Once the project is complete, the City is responsible for on-going maintenance of the traffic signal equipment and future lane repainting. The City continues to retain ownership of the roadway and signal equipment.

How do the dedicated bus and bike lanes work?

These lanes are intended only to be used by bicyclists, buses, or emergency vehicles. These lanes are off-limits to vehicles. Cars may only enter these lanes to make a right-turn where indicated by signage (e.g., ‘Right Turns Enter Here’) and skip striping in the red and green paint (dashed white lane, and wide ‘boxes’ of red and green instead of solid red and green). For example, the Centre St. map shows dashed lines for when a vehicle needs to enter the lane and take a right-turn into the Stop & Shop parking lot. Drivers must always yield to buses and bicyclists when making these turns, and pedestrians as they are crossing the driveway or side street.

What are the benefits of dedicated bus lanes?

Dedicated bus lanes make MBTA bus service more reliable, and this reliability can pave the way for more service frequency and additional upgrades. Bus lanes both reduce travel times and make them more predictable, freeing up time for more service frequency. You can learn more about the benefits of dedicated bus lanes on the MBTA's Bus Transit Priority Page.