The Malden Police Department's body-worn camera program was implemented in the Fall of 2022.  Officers record interactions with citizens during dispatched calls for service as well as during officer-initiated events such as traffic stops, field encounters, and during the service of court orders.  Footage recorded by officers is retained in a cloud-based storage system on a specified retention schedule.  All requests for copies of body-worn camera footage are subject to Massachusetts Public Records Law.

The implementation of body-worn cameras was mutually agreed upon in 2021 by both the City and its police officers.  That agreement represents the strong commitment by the Mayor and the Police Department in using all available tools and resources to keep our community and our police officers safe in a way that is fair, impartial, and transparent.  The MPD applied for a body-worn camera grant and was awarded $95,024 to initiate, acquire, and implement a body-worn camera program.  In order to qualify for the grant, the MPD submitted a comprehensive deployment plan that described a deliberate and phased plan to deploy technology as well as specific ways the program will enhance the department’s mission.

In early 2022, the City signed a contract with Axon Enterprise Inc. and purchased Axon Body 3 cameras along with requisite licensing and storage.  Prior to program implementation, the department worked diligently to develop policy, update technology infrastructure, and train department personnel.  The department also created a Video Evidence Unit, the assigned officers of which will be responsible for maintaining the body-worn camera equipment, software, and cloud based storage system as well as for responding to requests for copies of footage.  The MPD is proud to be the first agency in Middlesex County to implement an Axon body-worn camera program. 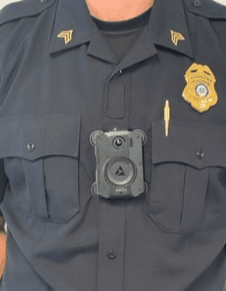